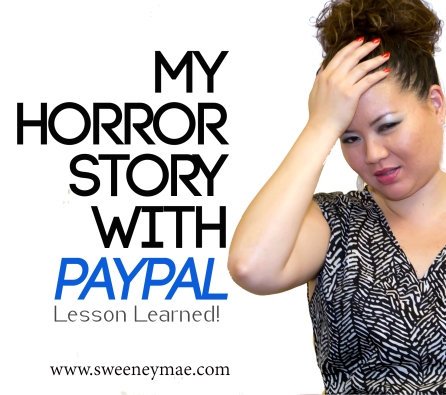 I have been using Paypal for a few years now. First as a buyer and now, as a business owner. Let me preface this by saying that Paypal was not the only one to blame but if they keep allowing this to happen, then there is no hope for small business owners who provide services versus products.

Let’s call the perpetrator “Joe.” Joe purchased two tables for a charity gala worth $2,000 that we produced. Six days after the event, Joe issued a charge back claiming this was an unauthorized charge. Clearly, I was perturbed because this has affected the amount of donation that we had promised the charity to donate after all was reconciled post event.

At first I was hopeful because Paypal allowed me to show them evidence that this was an authorized charge. I sent them text messages and emails and photos of the event for proof that the gala happened and Joe and his 19 guests ate their dinner. Paypal said it takes 30 days for them to review the case but on the 15th day, they sent me an email stating:

In the meantime, the disputed amount has been debited from your PayPal account because of the following reason(s):

– Intangible items are not covered under Seller Protection.

In addition, you have been debited a chargeback fee.

When I called them to rebuttal this unfortunate conclusion, I told them “Of course it was tangible! Joe and his 19 guests ate all their 20 dinners! Am I wrong?” The Paypal Associate calmly replied: “But it wasn’t something that was shipped.” – PAUSE RIGHT THERE!

You’re reading this… you mean to tell me if I had shipped their dinners then Paypal would cover this with insurance? So the difference between tangible and intangible is “shipping.” Complete nonsense but hey, what’s done is done!

Then the Paypal Associate continued “We have the best dispute team and they are working on disputing this with the credit issuer. It will take up to 80 days to find out whether or not we were successful with the dispute.”

I was speechless so I hung up!

I just felt like I was robbed! I work hard to do something great and help raise money for a charity and this is what I get in return? Joe pretty much screwed me and Paypal was not able to help with the situation? On top of that, I was charged $100 more because of a (false) chargeback? I’ve been doing events for almost 10 years and this was a first.

Don’t worry, As mad as I was, I now realized, why the CREDIT CARD AUTHORIZATION form exists and I will be using one moving forward!

4 thoughts on “MY HORROR STORY WITH PAYPAL (Lesson Learned)”