One of the “gigs” I used to do was work as an Event Producer for Max Amini, an Iranian/Persian Comedian.  It was such a fun ride but the Comedy Industry, I have learned, is not that funny! It’s brutal and just doesn’t pay enough! Are you laughing yet?

I have learned a lot and met so many people along the way and let me share with you one of the many projects I worked on.  Funologues, a marriage between the words “Funny” and “Monologues”.  It was inspired by a combination of the top reality TV hits: American Idol, Last Comic Standing, America’s Got Talent and other similar shows.

Being an Event Producer is no joke! Especially if you are shorthanded. You end up working on flyers, writing press releases, sending newsletters (to a big list of emails that seemed to be such a tough crowd), promoting online and offline (keep in mind back then, I was new to Hollywood, I didn’t know many people… more reason to work harder to get the seats filled), managing ticket sales, finding volunteers, casting, etc…. (there is no punch line to this statement).

We invited celebrities to judge our contestants. Max pulled all his might to get some celebs in the house. We got Dominique Deruddere, an Academy Award nominated director; Kathleen Wilhoite, actress from Gilmore Girls, My Sister’s Keeper and more; Shaun Toub, actor from The Last Airbender, The Kite Runner and more, and Bo Hyde, Producer and Founder of Cherry Road Films.

Plenty of people came to support the Funologues event for charity. Some came to support their friends and others came to hear what our judges would say about the performers. Overall, it was a room full of energetic audience and there were no seats left open!

We designed this event so well that we packed the house!  There were literally no seats left!

We auditioned over 250 actors within 3 days and rehearsed with them for 3 weeks. We had a very talented pool of actors who all deserved to be on stage! The audience were able to vote for their favorite and the celebrity judges voted for the best!

Plenty of the Industry people came to the show including Principato, CAA, 3G Management etc…

Here are the pictures of all our contestants:

There were so many great performances but one of my favorites was Brennan Murray (he just cracked me up!):

And the most exciting part is that our sleepless nights and 12 hour shift days paid off when one of the Wayan Brothers (Marlon) actually honored our invitation to come and attend the show! 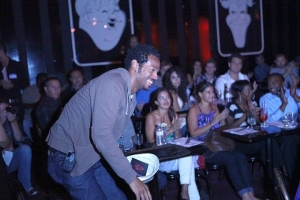 This show was a lot of work but it was also a great success! It’s like giving birth (so I heard)… you’ll forget about the pain and want to have another one again! Unfortunately and fortunately, shortly after this show, I got hired as a Marketing Manager. Totally legitimate reason to leave the Hollywood scene.

So one might say Hollywood is all glamor…. it’s not! It’s hard work and it’s true when they say Comedians are broke. No wonder why… they have over saturated the industry and it takes a lot of luck (when preparation meets opportunity) to be a big hit!

p.s. I respect the work that all performers have to do to survive the industry.